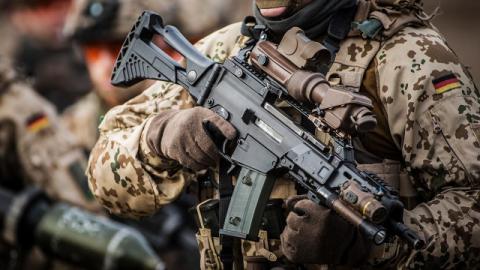 Germany prevents Estonia from providing military support to Ukraine by refusing to issue permits for the export of weapons of German origin to Kiev amid a potential Russian invasion, writes the American newspaper The Wall Street Journal.

Unlike the United States, Britain, Poland and other allies, the German government has refused to export deadly weapons directly to Ukraine.

In the case of Estonia, Berlin also refused to allow a third country to send artillery to Ukraine, as the weapons originated in Germany, according to Estonian and German officials.

The issue is seen by Western security experts and Ukraine as a test of Berlin's arms transfer policy during a growing crisis in Europe, and points to the difficulties facing the United States and its European allies in forging a common response to the military build-up of Russia near Ukraine and their demands.

"Germany, they are very hesitant to deliver to us," said Ukrainian Defense Minister Oleksii Reznikov in an interview with The Wall Street Journal.

German officials said the deadlock was the result of a long-standing policy on arms exports to tense regions.

"The principle that governs arms exports is always the same - whether it comes directly from Germany or from third countries - no permit has been issued at this stage," said a spokesman for the German government. "It is currently not possible to assess the outcome of the process," he added.

A spokesman for the Estonian government said his government was still trying to persuade Germany to change its mind.

"We hope to get the approval of Germany," said Kristo Enn Vaga, an adviser to the Estonian defense minister. "Estonia has shown that we want to help Ukraine in...