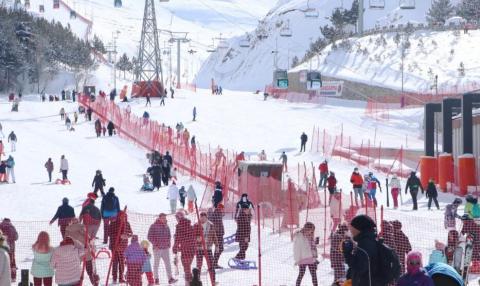 Thousands of people have mobilized in Turkey after the mid-term break at schools began on Jan. 21, and the country's skiing resorts appear to be one of the main beneficiaries of this two-week-long holiday even though harsh winter conditions, including heavy snow, continue to batter many provinces.

"Demand for ski resorts increased 40 percent this year compared with the previous years and the occupation rate at hotels in major destinations, such as Kartalkaya, Abat, Uludağ, Erciyes and Palandöken, is above 90 percent," said Firuz Bağlıkaya, head of the Association of Turkish Travel Agencies (TÜRSAB).

Domestic tourism activity gained some momentum with the start of the school break, but people are showing a particularly strong interest in the ski resorts.

"Agencies started to receive reservation requests even before the mid-term break began. And demand is likely to increase in the first week of the break. The families with children are the main clients. Reservations suggest that domestic tourism activity will be strong in the entire winter season, Bağlıkaya said.

TÜRSAB member agencies report strong demand for ski resorts near the large cities as well as for other destinations on the coastal areas, such as Antalya, Bağlıkaya added.

The situation is more promising than last year when the COVID-19 pandemic hindered tourism activities, he said. "I believe one reason for that is the measures the hotels and other facilities take in line with the directives from the Health Ministry."

In early reservations, a family of four booked a 4-night package tour for somewhere between 8,000 Turkish Liras (around $595) and 10,000 liras, Bağlıkaya said, noting that the prices for a 4-night stay at facilities in the southern coastal...