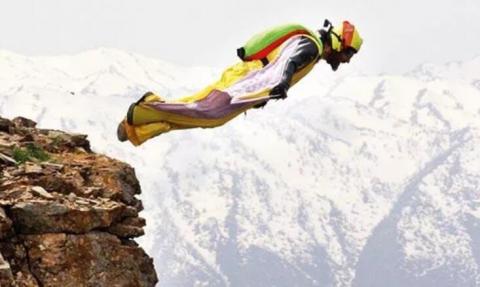 A Turkish official working at a cable car facility company in Turkey's southwest flies his way to his house in his wingsuit every day after work, having an experience that may be considered breathtaking for some.

Cengiz Koçak, the 49-year-old general manager of Babadağ Cable Car Company located in the Mediterranean resort town of Fethiye, reaches his home by flying after his shift on the 1,965-meter-high mountain is over.

It takes three or four minutes for Koçak to reach his home from the mountain.

When Koçak was appointed to his post for the first time, he examined the distance between the house and the facility at the top of the mountain. Then he decided to put this idea into practice when he saw that his calculations were correct mathematically.

"I jump with a parachute from any fixed place such as antennas, bridges, cliffs, and buildings. At the same time, if these places are high enough, I jump with a wingsuit," Koçak said, expressing that almost his whole day and now his life is being spent on the mountain.

Stressing that he decided to become a parachutist when he was seven years old, Koçak began parachuting in 1991 by jumping off from airplanes when he was a cadet and became a free-type paratrooper while serving as a non-commissioned officer in the Kayseri 1st Commando Brigade.

After his retirement, Koçak got interested in base jumping in 2011 and became a wingsuit athlete in Turkey with training he received in California.

Koçak claims that he has made approximately 9,000 jumps so far after getting acquainted with the wingsuit sport.

Popular amongst his circle with the name "batman," Koçak participated in competitions on behalf of the Turkish Armed Forces and the national team and achieved many...