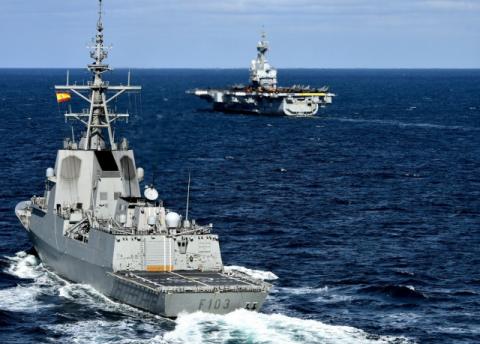 The Spanish frigate Blas de Lezo sails to the Black Sea from the Ferrol naval base on the Atlantic coast.

It is part of a pledge promised by Defense Minister Margarita Robles to bolster NATO forces amid tensions with Russia over the build-up of Russian troops on Ukraine's border.

With a crew of 190, the frigate will join SNMG-2, one of NATO's naval units. The mission was planned in advance, but was withdrawn earlier due to the conflict in Ukraine. This is the second part of military support for the Alliance, after the Meteoro minesweeper sailed from the Canary Islands to the Black Sea four days ago.

The government is also ready to send fighters to Bulgaria, which has caused serious disagreements among its coalition partners.

According to Podemos, this is a "serious mistake", and according to the conservative opposition People's Party, it is the right move. Meanwhile, Prime Minister Pedro Sanchez held telephone talks with EU High Representative for Foreign Affairs and Security Policy Josep Borrell and European Council President Charles Michel to discuss the possibility of continuing diplomatic talks with Russia.

He tweeted, "It's time for diplomacy," adding that he was monitoring the situation "very closely."

Following the situation in Ukraine very closely, in permanent contact with the representatives of the EU and NATO, as well as with European leaders. It is the time for diplomacy. We are committed to unity, de-escalation, solidarity and dialogue to resolve the crisis with Russia.