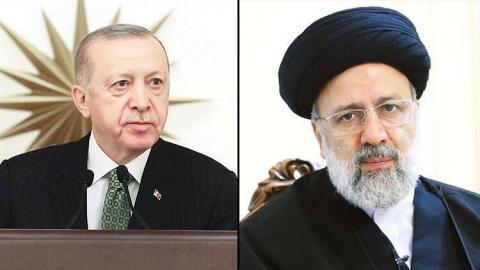 The Turkish and Iranian presidents, Recep Tayyip Erdoğan and Ebrahim Raisi respectively, have discussed ways to improve bilateral relations ahead of an upcoming high-level cooperation council meeting in Tehran as well as regional developments in the Caucasus.

The two leaders spoke on the phone late Jan. 22, according to a statement from the Turkish presidential office, which said Turkey-Iran ties and regional issues were discussed.

Erdoğan mentioned the Turkey-Iran High-Level Cooperation Council meeting that will be held in Tehran in the coming period during which some agreements are expected to be signed.

On regional affairs, Erdoğan informed Raisi about Turkey's intention to host the conference that will gather the countries in the Caucasus in the format of 3+3 with the objective of creating a solid ground for a lasting peace and stability in the region following the Azerbaijan-Armenia war in late 2020. The first 3+3 meeting was held in December in Moscow at the level of senior diplomats. Georgia did not attend it because of its pending problems with Russia.

For his part, Raisi expressed the country's willingness for long-term relations with Turkey in all fields, saying Tehran welcomes plans for strategic cooperation with Ankara, according to the Iranian media. Raisi suggested that two countries have the potential to expand cooperation on mutual and regional issues.

"Tehran supports the establishment of lasting peace and stability in the region," Raisi added. He emphasized that respect for the countries' national sovereignty and territorial integrity is the sole way to establish sustainable security and stability across the region.

According to the reports on the Iranian media, Erdoğan said Turkey regards Iran as a...