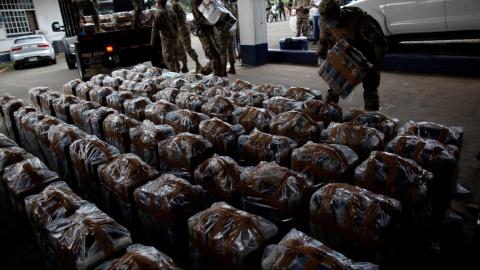 Austria's public broadcaster ORF, in a news report on Sunday, said the amount of hard drugs coming from the Balkans to Austria had dramatically increased recently, making effective control of the Austria-Slovenia border region of Carinthia hard to handle for law enforcement.

"The drugs are increasingly being handed over in private homes, which makes investigations more difficult," the report said.

The report quoted Christian Liebhauser on the behalf of the state court saying that the amount of smuggled drugs has increased from grams to kilos. "We used to talk about grams, today we also talk about hard drugs like cocaine or heroin in terms of kilos," Liebhauser was quoted as saying.

Carinthia has become a centre for drug smuggling in recent years, where handovers are often made in private homes, state criminal officer Karl Schnitzer said, adding that the drugs tend to be sold off quickly.

EuroActiv - a media organization - reported that in early December in Carinthia three men were tried for the sale of close to ten kilos of heroin. Police raids on 13 December at 16 different locations then saw the arrest of 11 suspects charged with trading cocaine. The targeted operators had all been smuggling cocaine from Slovenia into Austria.

Last September, Europol charged 61 people in a Balkan cartel with supplying Europe with cocaine. The operation covered eight countries and was coordinated by Europol`s European Serious Organized Crime office. The countries were: Spain, Croatia, Serbia, Germany, Slovenia, Bosnia and Herzegovina, the United States and Colombia. 2.6 tons of cocaine and 324 kilos of marijuana were seized during the operation.