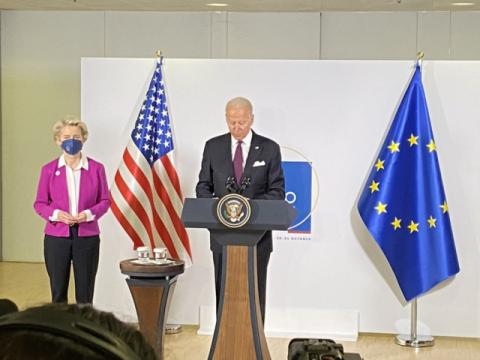 A White House statement said the leaders stressed their common desire for a diplomatic solution to the crisis over Ukraine, but also discussed "preparations for large-scale consequences and the high economic cost" that Russia would pay if it invaded Ukraine, in addition to the "strengthening NATO's eastern flank".

After the meeting, Polish President Andrzej Duda said that NATO is united on the issue of Ukraine. "I want to emphasize the unity of the North Atlantic Alliance," he told reporters. "Currently, there is no ally to break solidarity with Ukraine, with other NATO members," he said.

A statement from Downing Street said the leaders agreed that if Russia invaded Ukraine, the Allies should respond quickly with punitive measures, including an "unprecedented package of sanctions" against Moscow.

The de-escalation of tensions with Russia over Ukraine requires firm and clear warnings, but also an intensified dialogue with Moscow, the French presidency said. Macron will hold talks with Russian President Vladimir Putin and Ukrainian President Volodymyr Zelensky "in the coming days".