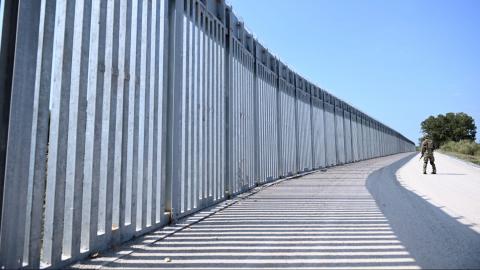 2021 was a grim year for what are called "European values". New fences in the external borders of the EU, high-tech surveillance systems, regular state violence against innocent people, and deadly pushbacks were used in the name of a "hybrid war", for "border security", against "illegal migration", and in the name of "defense", distorting the reality of people fleeing wars and extreme poverty in the borders of Europe.

Since 2011, roughly two decades after the fall of the Berlin Wall, when the first fences started being built in Europe as a short-term measure to keep migrants out, it has become evident that migration cannot be contained. People who don't have legal ways to move away from misery pick dangerous ones and go under the radar.

On November 24, 2021, 27 migrants and refugees lost their lives when the dinghy in which they were trying to cross the channel between France and Britain deflated. It was the worst tragedy in decades recorded in the sea between the two countries. British Prime Minister Boris Johnson said he was shocked, however, a lot of talk of agreed border controls in the framework of Brexit has come to little.

In early December 2021, Slovenia accused Croatia of opening the borders and actually encouraging migrants and refugees to cross them and apply for asylum in its neighbor. An investigation on the "Western Balkan route" reported in October that Croatian police forces were beating and illegally pushing back migrants and refugees to Bosnia and Herzegovina. Romanian border guards meanwhile sent refugees back to Serbia. In early September 2021, Bulgaria sent troops to the border with Turkey and Greece to support 1,000 police officers who were deployed there to stop refugees coming from Afghanistan.