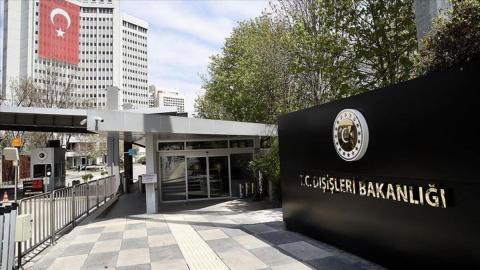 Turkey's near-term priority in foreign policy will continue to be normalizing the strained ties with regional foes, including Armenia, Israel and Gulf countries, the daily Hürriyet has learned from sources.

An overall assessment of Turkey's foreign policy and its priorities was made at a briefing held at the Turkish Presidency a couple of weeks ago, which has concluded that Turkey's success in dealing with internal problems also depends on its diplomatic performance.

The creation of a "trouble-free circle" around Turkey and normalizing the diplomatic ties with Armenia and Israel, as well as other regional countries, have been mentioned as necessary.

Turkey and Armenia held their first meeting at the level of special envoys in Moscow and agreed to continue talks for reconciling and establishing diplomatic and economic bonds after three decades. As part of confidence-building measures, they have also agreed to start reciprocal charter flights between Istanbul and Yerevan.

According to the information obtained from the briefing, it has been agreed that further studies should be made to launch flights between different cities, including Kars and Van, the cities hosting important religious and historical sites for Armenians. Especially Van, where a historical Armenian Church on Akdamar Island is located, can turn into a touristic spot for the Armenians, noted the briefing.

Plus, participants of the meeting discussed the need for a restoration campaign of some historical architectural structures near Kars, including bridges and buildings that are of importance to Armenians. In addition, increasing trade and economic activities with Armenia would ease up the Armenian diaspora, which seems to be skeptical about normalizing ties with...