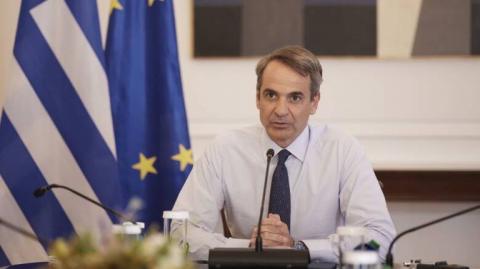 Greek Prime Minister Kyriakos Mitsotakis on Wednesday morning offered another apology, on behalf of his government and personally, in the wake of major traffic problems created by an intense - but more-or-less forecast - snowstorm on Monday throughout the greater Athens area.

The apology, the second in a span of roughly six months, with the first "mea culpa" coming amid the devastating wildfires last summer, came as thoroughfares around greater Athens slowly began to open up on Wednesday. Heavy snowfall in a very short period of time stranded thousands of vehicles - practically all without snow chains or special tires - on roads. Beyond the state's and regional authority's responsibility, some 1,100 vehicles and 3,500 people were stranded on the Attiki Odos tollway, where a private company exploits and manages the 70-kilometer highway that arcs around the Greek capital and connects to the Athens International Airport (AIA).

Speaking during a Cabinet meeting, Mitsotakis said the tollway concessionaire will face more repercussions as a result of Monday's debacle.

At the same time, he admitted that the storm front, code-named "Elpis" (Greek for, of all things, "hope"), caused the absolute interruption of road transportation in the greater Athens area.

On the bright side, compared to similar such snow storms, power outages were reportedly fewer this time. One reason cited, ostensibly, is that the grid and power transmission operators, as well as local municipalities, has...