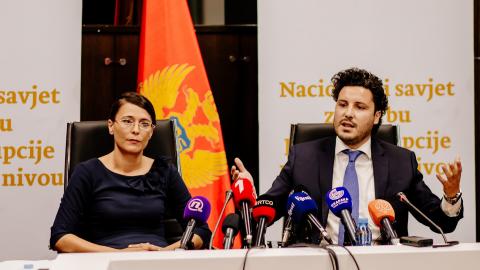 As political tensions grow, Krivokapic was appointed head of the Council after the dismissal of Abazovic, which prompted the resignation of Calovic Markovic, head of the watchdog Institute Alternative Stevo Muk and two other council members, Milan Popovic and Milena Samardzic Popovic.

The new government formed the National Council, a six-member body for investigation of corruption within state institutions, in January last year.

Civic activist Dina Bajramspahic said Krivokapic was trying to grab power within the government. "The fact that the Prime Minister and a group of ministers are now taking over other functions in the government is an illegitimate concentration of power, characteristic of autocracies. It is the usurpation and suspension of institutions," Bajramspahic told BIRN.

"It means that Krivokapic and several ministers will run the entire government until a new one is formed, which will not be for a negligible time," she added.

The political crisis within the shaky coalition government escalated on January 19 when the ruling Black on White coalition, led by Abazovic, and opposition parties, proposed a no-confidence motion in the government, saying they needed to see if it still had the support of the majority in parliament.

The proposal came after, on January 17, Black on White leader and Deputy Prime Minister Abazovic called for the formation of a minority government to overcome the political stalemate.

On January 20, the government instead proposed shortening parliament's mandate as a way of moving toward early elections, while speaker Aleksa Becic scheduled the...