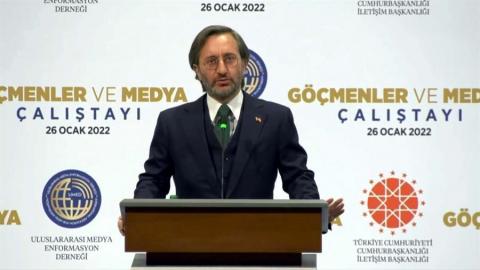 A voluntary, safe and honorable return of Syrian migrants to their homeland is at the center of Turkey's refugee policy, a Turkish official has said, informing that more than half a million Syrians have already settled in their own country as a result of Turkey's efforts.

"We attach great importance to voluntary, safe and honorable return of refugees to their homeland. This is one of the vital and central elements of our refugee policy. To this end, we act not of words but of deeds and take steps to contribute to peace and stability in the region," Presidential Communications Director Fahrettin Altun said at a workshop on media and migrants on Jan. 26 in Ankara.

Altun informed that more than 500,000 Syrians have already returned to their country as a result of Turkey's efforts to create secure and livable settlements in northern Syria.

The developments since the early 2010s have created divided nations, spreading terrorism and instability in Turkey's neighborhood, and Turkey stood as the best example in tackling all these problems, including through its realistic and humanitarian refugee policy, Altun said.

The entire world has suffered from the growing migrant problem, but Turkey is the one most suffering because it is hosting the most refugees in the world, Altun stated, adding, "It was not us who wanted this. A very big fire broke out in our region. We did not start this fire, on the contrary, it was we who exerted most efforts to put it out. And we continue to do so."

"Let me put this openly: The reason of this fire is Western-led new imperialism," he suggested, blaming some regional leaders for collaborating with foreign powers.