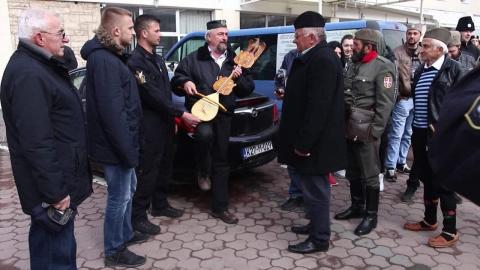 But the threat posed by right-wing groups, such as the Ravna Gora Chetnik Movement, has been largely neglected.

"Any associations cherishing extremism, the Chetnik or neo-fascist ideology, should be labelled as dangerous and explicitly deviant in both Bosnian entities," said Aljosa Campara, interior minister in the mainly Bosniak and Croat Federation, one of two entities that make up Bosnia.

"For me, it is inconceivable that anyone holds a different view," he told the Balkan Investigative Reporting Network Bosnia and Herzegovina, BIRN BiH.

State Security Minister Selmo Cikotic said the new strategy should define a broader spectrum of measures to deal with and, if necessary, ban organisations such as the Ravna Gora Chetnik Movement.

"It is dangerous in itself, but it is also dangerous in the sense that it produces extremists and extremism on other sides," Cikotic told BIRN BiH.

But experts involved in the drafting of a new strategy say the process has become bogged down in disagreement over how to define and label right-wing and extremist organisations, with particular resistance coming from working group members representing the predominantly Serb-populated Republika Srpska, the other entity in Bosnia.

The previous strategy was drafted within a month in 2015; this time, eight months have passed since the working group was formed and there is still no final draft. Participants whom BIRN spoke to expressed confidence that a document would be adopted in the first half of this year.

The process so far, however, has revealed a failure to act on previous criticism concerning the lack of a comprehensive and independent assessment of the last strategy and the reliance on donor-funded activities.