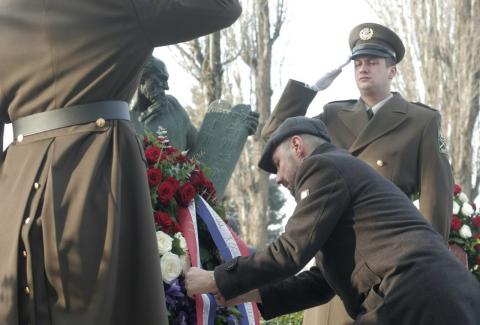 The Croatian parliament started its session with a minute of silence to commemorate International Holocaust Remembrance Day on Thursday, while a delegation led by Deputy Prime Minister Boris Milosevic and Culture Minister Nina Obuljen Korzinek laid wreaths at the Mirogoj Cemetery in the capital Zagreb.

Prime Minister Andrej Plenkovic described the Holocaust as "one of the worst crimes in human history" and paid tribute to victims of Croatia's World War II-era Nazi-allied Ustasa regime, which interned and killed Jews, Serbs, Roma and anti-fascists at camps like Jasenovac.

"Today is the day we should remember the notorious Ustasa camps, Jasenovac above all, where thousands of Jews, Serbs, Roma and Croatian anti-fascists and democrats were killed… Jasenovac is a painful and tragic part of Croatian history and eternal remembrance and condemnation of it are a part of our culture of remembrance," Plenkovic said, news website N1 reported.

Croatian Jewish community leader Ognjen Kraus was also at the ceremony at the Mirogoj Cemetery, where he told media that "we are here today to remember the darkest period in European civilisation".

However, Kraus said that Croatia is "still pretending to be anti-fascist" while maintaining the status quo, in which the symbols and slogans of the fascist Ustasa regime have not been banned in order to appease "some of our [right-wing] voters".

Kraus said that last year he was promised a meeting in September with Plenkovic about legal changes to outlaw the use of Ustasa symbolism, but the meeting has yet to take place.

He told journalists that he had "less and less faith" that the meeting and the legal amendments will happen.

"But I haven't given up on the meeting and I will keep trying. I am...

Bulgaria: We are waiting for over 1.5 million more Foreign Tourists this year

German cyclist rides in Turkey after traveling to 11 countries