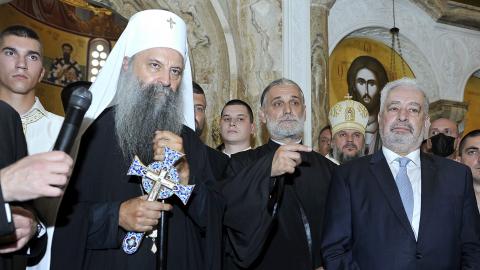 PM Krivokapic said on Wednesday that a final draft of the agreement had been sent to the Serbian Orthodox Church, which has to decide on a signing.

"This process has gone through several stages of agreement harmonization and the government expressed its absolute readiness to sign it as soon as possible," Krivokapic told the media.

Montenegro has signed several "fundamental agreements" already with smaller religious communities: with the Catholic Church in 2011, and with the Islamic and Jewish communities in 2012.

No agreement has been reached with the Serbian Orthodox Church, however, even though it is by far the largest religious body.

The first draft of a fundamental agreement was proposed to the Church in February, when the then Minister of Justice, Human and Minority Rights, Vladimir Leposavic, said it would correct past injustices and give the Church the same rights as other religious communities. Media reported that on March 11, the draft was presented to the Serbian Church's governing synod, which had some objections.

Last October, Krivokapic said an agreement would be signed when the Serbian Church approved the government's draft, which was previously harmonized with the Montenegrin constitution and legislation. But on January 15, the Serbian Church's Patriarch, Porfirije, said the Church's legal experts believed there was room to improve the agreement.

"If it makes sense, we can start it from scratch. In the foreseeable future, after political differences in Montenegro calm down, we will reach a solution that isfor the good of all," the Patriarch told the media.