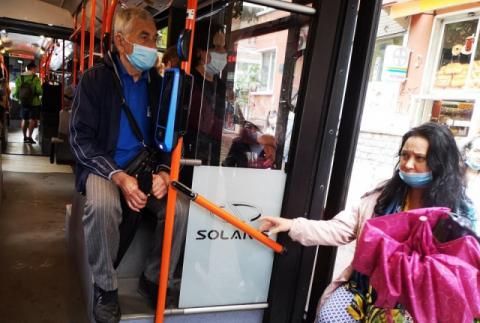 More than 6,000 people have been fined for failing to comply with anti-epidemic measures in 2021. This is stated from a written answer of Interior Minister Boyko Rashkov to a question from GERB MP and former Interior Minister Hristo Terziiski.

According to Article 209a of the Health Act: "Whoever violates or fails to implement anti-epidemic measures introduced by the Minister of Health or the Director of the Regional Health Inspectorate under Article 63, paragraphs 4 or 7 and Article 63a, paragraphs 1 or 2, except if the act does not constitute a crime, shall be punished by a fine of BGN 300 to 1,000, and in case of repeated violation - by BGN 1,000 to 2,000."

Most acts were written up in January (1192) and February (1066), when there was still a partial lockdown and restaurants and other outlets were closed. The next month with the most acts is October (878), and the least in June (59) and July (76).

The response of the Interior Minister also shows that more than 1,400 people are being investigated for violating quarantine. Until recently, the official quarantine for patients in Bulgaria was 14 days. Some time ago, Dnevnik wrote that the state will pay for sentences for violated isolation because most courts overturn fines or sentences imposed on people who have not complied with state regulations.

In 2020, 786 people were convicted of violating quarantine, according to data published by the newspaper "Sega" and received by the Supreme Cassation Prosecutor's Office under the Access to Information Act. More than 3,253 investigations have been launched, in which 971 people have been brought to justice. Prosecutors have filed 484 indictments in court. There are 474 agreements, with only two proposals for acquittal and a...