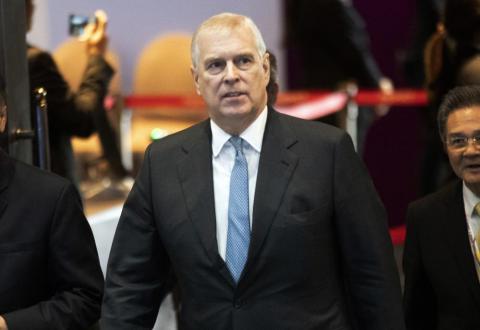 Britain's Prince Andrew is seeking a jury trial to clear his name in the sexual assault civil complaint he is fighting in New York, and which has already left him in disgrace and forced him to withdraw from royal duties, his lawyers announced Wednesday.

"Prince Andrew hereby demands a trial by jury on all causes of action asserted in the complaint," his attorney wrote in a motion filed at a Manhattan federal court.

His accuser, Victoria Giuffre, has said she had sex with the prince when she was 17 and a minor under US law after meeting him through the late US financier Jeffrey Epstein, who committed suicide in prison two years ago while awaiting trial for sex crimes.

The prince has not been criminally charged and has denied the allegations.

There is still the possibility that the two parties could reach a financial settlement outside of court -- though Giuffre's New York lawyer, David Bowies, told AFP Wednesday: "We look forward to confronting Prince Andrew with his denials and attempts to blame Ms Giuffre for her own abuse at his deposition and trial."

Giuffre, who is now 38, alleges that Andrew sexually assaulted her at the London home of socialite and Epstein friend Ghislaine Maxwell after a night out dancing in March 2001.

She sued the prince last year for unspecified damages, alleging that she was trafficked to him by Epstein and Maxwell.
Last month Maxwell was convicted of recruiting and grooming young girls to be sexually abused by Epstein, exposing a murky world of sex trafficking among the rich and...