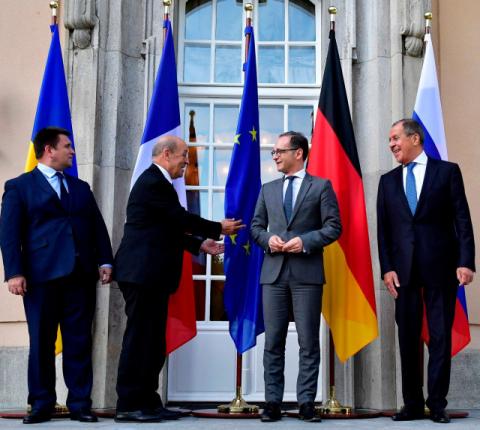 Moscow and Kiev have agreed to abide by a "ceasefire" policy during talks in the Normandy format in Paris. After nearly 9 hours of talks, Paris officials described the discussions as a "good signal".

The gathering of Russian troops near the border with Ukraine has raised fears that the Kremlin is planning an invasion of its neighbor Ukraine.

Adviser to French President Emmanuel Macron, who was present at the talks, stressed that the talks in Paris were about resolving the separatist conflicts in eastern Ukraine in 2014, not the threat of a Russian invasion now.

"In the current circumstances, we have received a good signal," he said.

For the first time since 2019, Ukraine and Russia have agreed to sign a joint agreement with France and Germany on the ongoing conflict between Ukrainian forces and separatists in the east.

The four nations have been working to reach a peace agreement on eastern Ukraine since 2014 and are known together as the Normandy Quartet.

The joint agreement commits the two sides to "unconditional compliance with the ceasefire" and schedules a new meeting in two weeks in Berlin.

The 2014 ceasefire agreement, re-signed in 2020, helped end the worst fighting in two regions of eastern Ukraine, after the deaths of about 13,000 people.

Kremlin envoy Dmitry Kozak said the main outcome of the quadripartite talks involving France and Germany was a ceasefire agreement.

He said that "despite all the differences in interpretation, we agreed that the ceasefire (in eastern Ukraine) should be supported by all parties in accordance with the agreements." He added that at the moment, the summit with the participation of heads of state "is not on the...