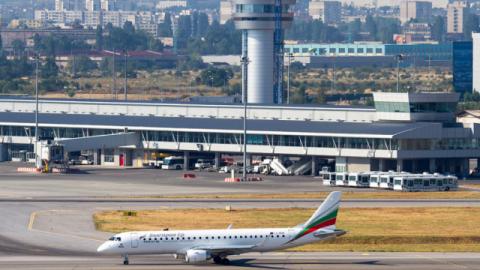 In 2021, European airports lost 1.4 billion passengers compared to 2019. Data are from the International Council of Airports ACI Europe, according to the press center of Sofia Airport. Decline registered all airports, regardless of their size and location. The main reason for the deterioration of the results in recent months is the Omicron variant, which further slows down the recovery, according to the summary data of the organization, which has a total of 427 airports.

In 2021, passenger traffic began to improve, up 37 percent from a year earlier, but the recovery is still far from the levels in 2019 when the number of passengers was almost 60 percent higher. The pandemic is the main reason for the state of the aviation sector, and the crisis caused by it is the biggest shock for the industry in history, the analysis shows.

Smaller regional airports are recovering faster than large ones, but are also more than 50 percent worse than in 2019. Most passengers last year served the airports in Istanbul, Moscow-Sheremetyevo, Paris-Charles De Gaulle, Amsterdam-Schiphol and Moscow-Domodedovo show ACI data.

The indicators at Sofia Airport follow the general trend - slow recovery, but significantly more unfavorable results compared to the period before COVID-19. In 2021, the capital's airport served 3.3 million passengers, which represents only 47 percent of passenger traffic in 2019, when passengers were over 7.1 million. The negative statistics are complemented by nearly 3,900 applications for cancellation of flights to and from Sofia, made in the period from 5 to 25 January 2022. Despite the efforts of management and maintaining extremely low and competitive levels of airport taxes at Sofia Airport, it is still expected that the aviation industry...