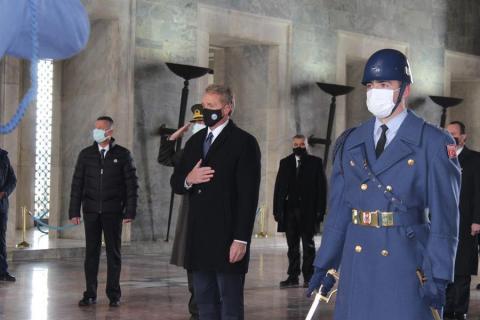 Turkey is an indispensable ally, anchored in NATO and an important partner in a region in constant flux, the new ambassador of the United States to Ankara said on Jan. 26.

"Our national interest is served when the United States and Turkey work together to confront the very real threats to global peace and security," U.S. Ambassador to Ankara Jeffry Flake said in an article with the title "politics stops at the water's edge" published on the embassy's website after he presented credentials to President Recep Tayyip Erdoğan on Jan. 26.

The interests of Turkey and the U.S. extend beyond the political and security realm and they benefit from a close economic partnership, built on balanced trade, investment, innovation, and collaboration, he stated.

Today, Turkey hosts nearly 2,000 U.S. companies, including some of the largest and most recognized brands of the U.S., he said, noting that Turkish companies are enjoying success in the United States, and in 2021, his country was Turkey's second-largest export market. Cultural, scientific, and educational exchange bind their people together as well, he added.

"I have learned over the years that lasting achievements in foreign policy come when different groups agree on a course of action. As we often say in Washington, "politics stops at the water's edge." That's why I was so gratified that my former colleagues in the United States Senate, Democrats and Republicans alike, unanimously supported my confirmation as Ambassador to such a consequential country," he said.<...