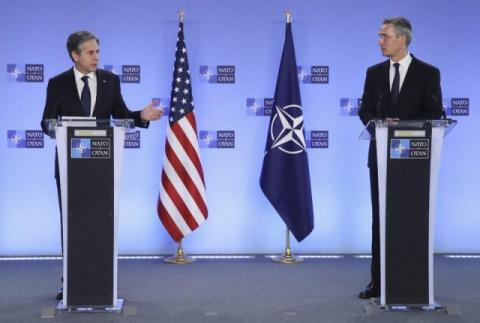 The United States and NATO have rejected Russia's demand that the alliance close the door on Ukraine's future membership, as well as abandon any further enlargement. In addition, Nord Stream 2 will not operate if Russia invades Ukraine.

These messages came from US Secretary of State Anthony Blinken and NATO Secretary-General Jens Stoltenberg on the day the US provided written responses to a list of Russian demands as conditions for de-escalation in the Ukrainian crisis.

Hours after the response was delivered last night by Washington's ambassador to Moscow, John Sullivan, Blinken said the United States was not ready to make concessions but offered a "serious way of diplomacy" to get out of the crisis "if Russia chooses to do so."

According to the Secretary of State, the US written answers clearly state the "fundamental principles" of the United States, emphasize Ukraine's sovereignty and its right to choose its own defense alliances.

Moscow is asking the United States and NATO for guarantees not to expand the alliance (so that Georgia and Ukraine do not join) and to suspend all activity in Eastern Europe, Central Asia and the Caucasus.

"We work on all possible scenarios"

The United States does not plan to publish the text of the document, but according to Blinken, it contains "many positive things that need to be worked on." If Russia does not want to respond constructively, "we are working on all possible scenarios," the secretary of state said.

He said there were areas of "reciprocity" and possible security cooperation, but they...