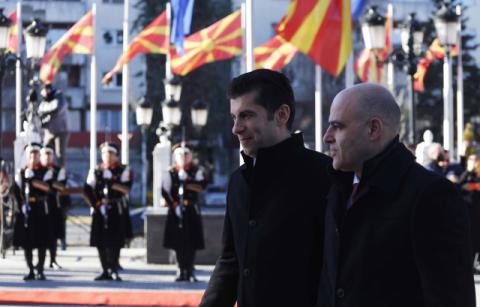 "Dimitar Kovachevski has been the Prime Minister of RN Macedonia for a week and has spent 4 of those 8 days with the Bulgarian government. This indicates a desire to get the job done." This was stated by Prime Minister Kiril Petkov, answering questions from members of parliament about the consequences of the two meetings with the Macedonian Prime Minister.

Three Memoranda were signed Today between Bulgaria and North Macedonia

"The ministers who came to Bulgaria were a large number and we have made great progress in most areas. We signed 3 memoranda, which were in many key areas, including Corridor №8. Which has fallen off the list of European projects, if we want to include it, it will happen through joint work," Petkov said.

He said that while the discussions on economy and infrastructure were going on, the two sides also discussed topics that are important for Bulgaria - the rights of Bulgarians in the RNM and the framework position.

"Kovachevski said he saw no problem with including Bulgarians in the RNM Constitution. He did not commit to a timeframe. We are no longer talking about 5+1, but about 4+1. That in itself is progress," he said.

"Kovachevski said that Bulgarians will enter the Constitution like Albanians. We are currently discussing the deadline and this is part of the discussions. This will be a fact and Bulgarians in the RNM will have equal rights," he added.

According to him, many declarations have been made by both sides, but the real work has not been done.

"We organized a calendar for meetings every 7 days. I am glad that even the historical commission has confirmed that they will have three meetings in the coming months. I do not intend to...