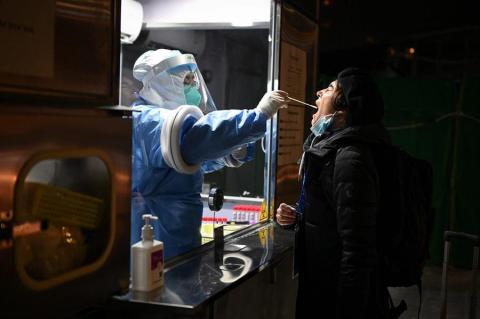 Chinese authorities locked down an area neighboring the capital city of Beijing this week following a handful of reported Covid cases, but made no public announcements about the fresh restrictions with just a week until the Winter Olympics.

Around 1.2 million people in Xiong'an New Area -- a new economic zone 100 kilometres southwest of Beijing -- are no longer allowed to enter or leave their residential compounds, local virus prevention staff confirmed to AFP on Friday.
While recent lockdowns in China are publicly announced and widely reported by state media, the Xiong'an restrictions appear to have been introduced by stealth with no public announcements -- sparking confusion among some residents of the area.
"We expect this (lockdown) to last around a week, but the exact timing is uncertain," said virus prevention staff in Xiong County, one of three counties in the area.
The restrictions kicked in on Tuesday, they added -- the same day authorities in another district noted five confirmed coronavirus infections had been discovered to date.

With the Winter Olympics beginning next week, Chinese authorities have scrambled to eradicate flare-ups in several major cities, including Beijing.
Cities such as Xi'an and Anyang have experienced hard lockdowns in recent weeks, with residents confined to their homes until multiple rounds of mass testing are completed and the outbreak suppressed.
Some users on China's Twitter-like Weibo were seen asking for further information about restrictions, while others questioned the extent of measures.
"Is there a need? Why can't we go home if the area is deemed low-risk? Don't make this one-size-fits-all," said a Weibo user this week.
Another said Thursday: "I don't think I'll be able to...