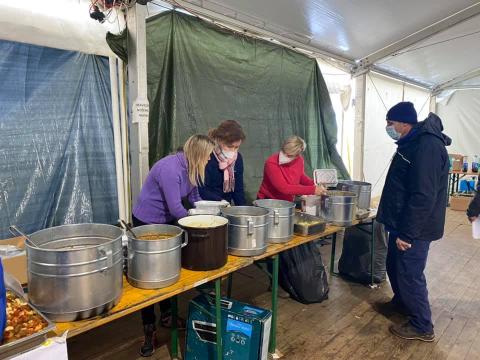 When Croatian Prime Minister Andrej Plenkovic visited the town of Petrinja on December 29, he was met with jeers and whistling. A year since a 6.2 magnitude earthquake devastated the central Croatian region of Banija, dissatisfaction over the slow pace of reconstruction is widespread.

A group of chefs from the humanitarian group Chef Kuha Doma [Chef Cooks at Home] received a very different kind of welcome, however.

On the first anniversary of the quake, volunteers cooked 365 meals for residents of Petrinja in a symbolic re-enactment of the outpouring of support and solidarity for the region a year ago, when the chefs churned out thousands of meals for weeks on end to feed those left homeless.

Thousands descended on central Croatia in the days following the earthquake, the second to strike the country that year following a similar quake in March that hit the capital, Zagreb. They brought food, water, clothes and other essentials, some even donating mobile homes and containers as places to sleep. Hundreds remain in makeshift homes provided by the Red Cross and other NGOs, as well as private companies and individuals.

A woman looks for items in a storage for humanitarian aid and supplies in the Strasnik village, near Petrinja, January 4, 2021. EPA-EFE/ANTONIO BAT

The response was the most visible of a number of recent examples of solidarity in Croatia, without which experts say some vulnerable groups would struggle to survive.

"If it wasn't for the solidarity of people in our society, many literally wouldn't have the chance to live, the chance to be healthy, or the chance to meet their basic living needs," said...