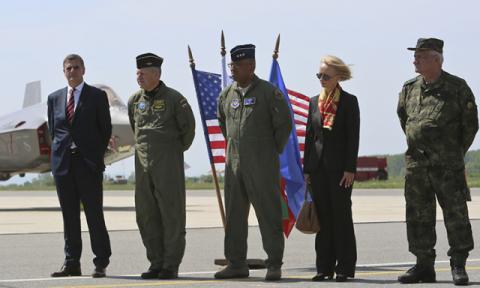 There are 206 American servicemen in Bulgaria. This was said by the Minister of Defense Stefan Yanev during the parliamentary control.

Under a 2006 agreement with the United States, no more than 2,500 civilians and uniformed U.S. servicemen may be present. This number was not exceeded, said Yanev.

"So far, there has been no case since 2006 in which the US military has even approached the 2,500 figure. Keep in mind that we are not talking about a permanent presence, but about this type of exercises that are held at the Novo Selo training ground. Even with the rotation, even on an annual basis, the number does not exceed 2,500 people," the minister said.

From January to June there will be an exercise with the Bulgarian military at the Novo Selo range, said Stefan Yanev.

He also pointed out that in the middle of the year the repair of the runway of Graf Ignatievo airbase should start. The infrastructure must be ready for the acceptance of the new F-16 aircraft.

BGN 180 million have been allocated for the repairs in the draft budget for this year.

Yanev assured that he would not delay the repair of the track.

"To avoid this future delay, I convened a Defense Council next week to see that we have all the necessary analyzes, preliminary information and requirements that we have to meet in order to avoid this delay, which will be very unpleasant and will affect the operation of the airbase."

A few days ago, Minister Yanev said that a delay of months is expected for the delivery of the first F-16 aircraft. This was scheduled to happen next year.

Yanev said that some of the contracts for other...