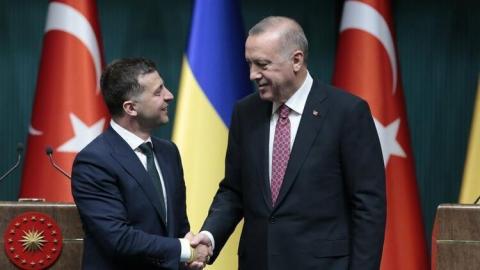 President Recep Tayyip Erdoğan will visit Ukraine on Feb. 3 as part of efforts to calm down tension due to the Russian confrontation in eastern Ukraine.

Erdoğan earlier expressed Turkey's readiness to host Russia and Ukraine within the scope of mediation efforts. Ankara has invited Russian President Vladimir Putin and Ukrainian President Volodymyr Zelensky to Turkey for a face-to-face meeting amid rising tension in the region, Erdoğan said on Jan. 20.

"We disapprove of the developments between Russia and Ukraine since the existence of an atmosphere of war in the region and the emergence of such psychology upsets us as a country that has relations with both the sides," he stated.
Ankara also attempted to hold the next meeting of the Organization for Security and Cooperation in Europe (OSCE) Minsk group between Ukraine and Russia in Istanbul.

Turkey also invited Putin to Turkey to hold a bilateral strategic cooperation meeting. The Kremlin on Jan. 27 announced that Putin accepted Erdoğan's invitation once the COVID-19 pandemic and the schedules of both leaders allow it.

Russia, which has a complicated historical relationship with Ukraine, has fueled an insurgency in the former Soviet republic's east that has killed more than 13,000 people since 2014.

Russia that year also seized Crimea after the overthrow of a government in Kyiv that had resisted efforts to move closer to Europe.

The United States has warned of severe and swift consequences if Russia invades, including possible personal sanctions on Putin, and NATO has put 8,500 troops on standby.

The increasing tension between the...