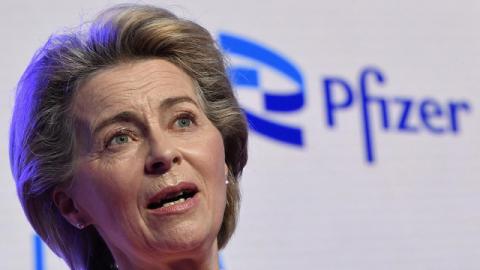 The two exchanged text messages before concluding the deal for the vaccines against COVID-19 between the EC and the pharmaceutical giant.

In an interview in April 2021, Von der Layen revealed that she had exchanged text messages with Bourla for a month while they were negotiating a contract for the supply of vaccines. In response to a request for access to public information from the journalist Alexander Fanta from the website netzpolitik.org, the Commission stated that there were no records of the exchanged messages.

"The lack of a specific response to this request for access to public information means that no attempt has been made to establish whether there have been such reports at all. This does not meet the reasonable expectations for transparency and administrative standards in the EC," said Ombudsman Emily O'Reilly.

She also asked the Commission to re-examine the availability of the relevant communications and to respond to the recommendations by 26 April.

"The ombudsman concluded that this was mismanagement," the statement said.

An EC spokesman has so far declined to comment to Reuters but said they would respond to the ombudsman within the deadline. The Ombudsman's recommendations are not legally binding but usually lead to increased scrutiny by the European Parliament.

The deal, concluded after negotiations via text messages and telephone conversations, as Von der Leyen herself admitted in an interview with the New York Times, is the largest contract ever signed for the supply of vaccines against...