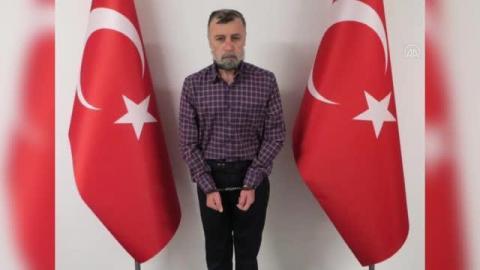 Turkey's National Intelligence Organization (MİT) has brought Nuri Gökhan Bozkır, who is a suspect in the assassination of academic Necip Hablemitoğlu, to Turkey from Ukraine.

The MİT on Jan. 27 handed the suspect to the police for questioning in Ankara.

Ankara University's Hablemitoğlu, known for his research and books on FETÖ, was killed in 2002 in front of his house.

Authorities determined that Bozkır was in Ukraine where he was detained in Kyiv in July 2019 after the Interpol issued a red notice for the suspect. However, he was later released after spending three months in jail and was put under house
arrest.

Bozkır sought asylum in Ukraine but local authorities refused his application in December 2020 and in the same month ruled for his extradition to Turkey. The suspect's lawyers appealed against the extradition decision. Bozkır failed to appear in several appeal hearings.

President Recep Tayyip Erdoğan announced on Jan. 26 in a televised interview that the MİT has brought Bozkır to Turkey.
Erdoğan recalled that Hablemitoğlu was killed before his book on how FETÖ infiltrated state institutions was published. The president noted the suspect also had ties with ISIL, providing guns and ammunitions to the terrorist organization.
Hablemitoğlu had branded the FETÖ as a criminal organization in his works.