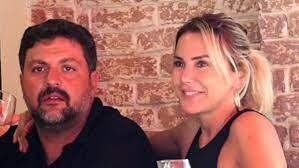 A 42-year-old Turkish lawyer was shot to death in Istanbul by two assailants late on Jan. 26 following a fight that reportedly broke out over money.

According to police sources, the two men met with Şafak Mahmutyazıcıoğlu at a restaurant he owned in the Yeşilköy neighborhood to discuss a property sale with him and one of his clients.

The two reportedly demanded 100,000 Turkish Liras ($7,340) more for the sale, but the lawyer objected to make the payment. A fight later broke out and the assailants shot seven bullets in Mahmutyazıcıoğlu's legs.

Mahmutyazıcıoğlu died of hemorrhage after a bullet aimed at an artery, while his driver is still undergoing treatment after also being shot.

Istanbul police detained the two assailants early on Jan. 28, but the search for four other suspects who were detected near the crime scene at the time of the attack continues.

Mahmutyazıcıoğlu, a father of two from his first marriage, married Erken seven months ago. Providing legal consultancy for several companies in Turkey, he also served on the board of Istanbul football giant Beşiktaş for a year.

"I lost a brother, a dear friend," Fikret Orman, a former Beşiktaş president, told daily Hürriyet on Jan. 28. Orman was the last person to meet Mahmutyazıcıoğlu at the dinner just before the attack. The assailants entered the restaurant after Orman left, police sources said.