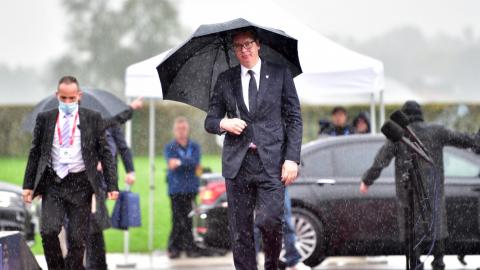 Death threats and planned assassinations of President Vucic are so common in the regime media that no one takes them seriously now.

Dozens of times the public saw headlines to which they have since become resistant: "They are killing Vucic", "They wanted to blow up Vucic", "They are preparing a sniper for Vucic", "Eight murderers were waiting for Vucic …

These dangerous claims were never substantiated by any evidence and all ended in insinuations. No one has ever been charged or convicted of plotting to assassinate the Serbian President.

The series of "assassinations" began back on October 29, 2016, when a "larger quantity of weapons was discovered" in the forest in Jajinci, near the family home of the then Prime Minister. The conclusion was self-imposed: someone wanted to liquidate the Prime Minister.

The public was kept informed for days about every detail of the investigation, dozens of "suspects" were detained and questioned, but without results. The only thing that the public received was the stupid statement of the then Police Minister Nebojsa Stefanovic: "We connected some people with some spaces, some people with some objects, some people with other people who were involved in such acts. But if I told you who, what, where and how, I would warn them of what we know."

In the end, everything fell into oblivion, and doubts about the origin of this arsenal remain.

Last February, Veljko Belivuk and his crime group, which was close to individuals from the higher echelons of the Serbian police, were arrested.

Statements of Marko Miljkovic leaked from the hearing, said that their team, on the orders of the then Defence Minister Aleksandar Vulin, filled a car with weapons and left it near Vucic's house in Jajinci.