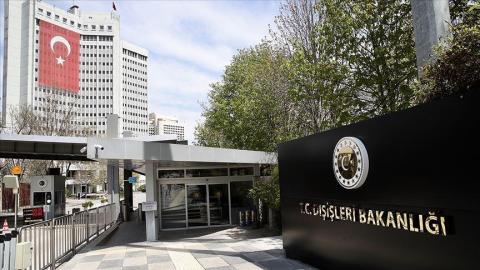 Despite all calls and warnings, the consent of the Turkish Cypriot authorities was not sought once again, contrary to the United Nations rules and principles, while the U.N. Security Council extended the mandate of the U.N. Peacekeeping Force in the Island of Cyprus (UNFICYP) for six months with its resolution 2618 (2022) adopted on Jan. 27, the Foreign Ministry said.

We fully support the statement of the Turkish Cypriot Foreign Ministry concerning the resolution, said the statement.

It is disconnected from reality and also contradictory on the side of the U.N. Security Council, on one side calling on the parties on the island to reach a settlement, and on the other side, trying to impose a settlement model that has been tried and exhausted for more than 50 years, proven ineffective and does not reflect the consent of one side, said the ministry.

On the other hand, the U.N. Security Council's criticism of the steps taken by the Turkish Cypriot authorities in Varosha (Maraş) in accordance with international law is a "violation of property rights," said the statement.

"Furthermore, the Council's disregard of the unilateral steps taken by the Greek Cypriot Administration in the Eastern Mediterranean, which are increasing the tension and ignoring the rights of the Turkish Cypriots, is again an example of double standards," it said.

"With a view to achieving a just and lasting solution, we call on the Security Council and the international community to adopt a sincere and constructive attitude based on the realities of the Island, and, to this end, to reaffirm the sovereign equality and equal international status of the Turkish Cypriot people," the ministry stated.