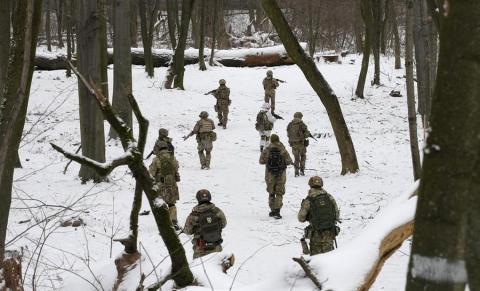 The United States and Germany on Jan. 27 warned Russia that a major gas pipeline was at stake if it invades Ukraine, as Washington voiced hope for a diplomatic way out despite frigid statements from Moscow.

A day after the United States and its allies formally responded to security demands issued by Russia, top officials in Moscow said their chief concerns were not addressed but notably did not rule out new talks.
The United States has warned Russia of swift and severe consequences if it invades Ukraine after Moscow amassed tens of thousands of troops on the border with its Western-leaning neighbor.

Following talk of divisions within Europe, German Foreign Minister Annalena Baerbock told parliament that her government was "working on a strong package of sanctions" alongside allies that would include Nord Stream 2.
The pipeline, which Germany has defiantly built despite criticism by the United States and Eastern Europeans, will more than double supplies of Russian natural gas to Europe's largest economy.
In Washington, a top official voiced confidence that an invasion would stop Germany from activating the multibillion-dollar project, which was completed in September but still requires testing and regulatory approval.
"If Russia invades Ukraine, one way or another, Nord Stream 2 will not move forward," said Victoria Nuland, the undersecretary of state for political affairs.

"I think the statements coming out of Berlin even today are very, very strong," she told reporters.
The White House announced that Germany's new chancellor, Olaf Scholz, will visit on February 7 and discuss the crisis with President Joe Biden.
Stepping up the diplomatic offensive, the United States called a public meeting Monday at the UN Security...