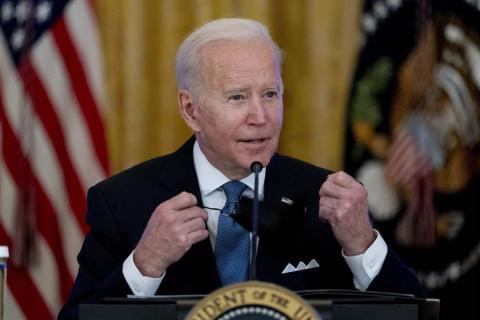 US President Joe Biden sought to maintain pressure on Russian leader Vladimir Putin over Ukraine on Jan. 28, announcing a small troop deployment to eastern Europe even as top Pentagon officials backed a renewed push for diplomacy.

As President Volodymyr Zelensky urged Western leaders to avoid stirring "panic" over the massive Russian troop buildup on his country's borders, Putin and French President Emmanuel Macron agreed on the need for de-escalation.
Neither Putin nor his European and American counterparts had until now appeared ready to give ground in the weeks-long crisis, the worst in decades between Russia and the West.

But according to a Macron aide, Putin told the French leader in a call lasting more than an hour that he had "no offensive plans."
In Washington, Biden nevertheless said he would soon send a small number of US troops to bolster the NATO presence in eastern Europe as tensions remain heightened.
The United States already has tens of thousands of troops stationed across mostly Western Europe.
At the Pentagon, top officials urged a focus on diplomacy while saying that Russia now had enough troops and equipment in place to threaten the whole of Ukraine.
Any such conflict, warned the top US general, Joint Chiefs Chairman Mark Milley, would be "horrific" for both sides.
"If that was unleashed on Ukraine, it would be significant, very significant, and it would result in a significant amount of casualties," Milley said.

But speaking alongside Milley, Defense Secretary Lloyd Austin said war could still be avoided.
"Conflict is not inevitable. There is still time and space for diplomacy," said Austin.
"Mr Putin can do the right thing as well," said Austin. "There is no reason that this...