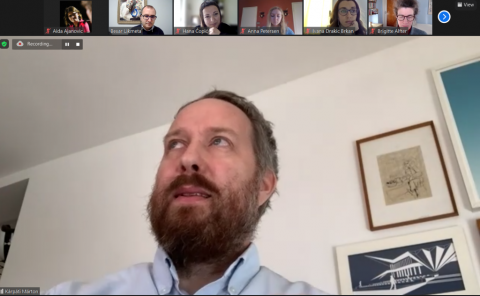 At one of the series of Platform B events, on Friday, BIRN presented its interactive publication produced within the project Local Journalism - European Perspectives.

The publication was created in collaboration with nine local media outlets from Bosnia and Herzegovina, Montenegro and Serbia.

Among other things, the publication aims to help journalists learn about alternative financing models and the opportunities that online fundraising and crowdfunding provide - and learn how to recognize fake news and limit its distribution.

It also explains the importance of local media collaboration and cross-border stories in giving stories wider coverage and impact and so becoming societal gamechangers.

While local media face similar struggles everywhere, panelists discussed their resilience and how we can learn from colleagues from the region and beyond.

The focus of the first part of the event was on an exchange between media representatives and journalists from EU countries who face the same or similar problems in their work in the region.

Anna Petersen, editor at Landeszeitung Lüneburg from Germany, spoke about the struggles of local newspapers to satisfy the need for information in smaller communities and the effect of the transformation created by technological upheaval and digitalization.

But Petersen stated: "This should not be a burden. We should discover new possibilities there."

She added that digitalization and platform development have their advantages because media can reach a broader audience more easily. She also undermined that she believes that print format has not reached the end of its existence. "I don't like to say that paper format is out, that it is over. Maybe the paper format will be...