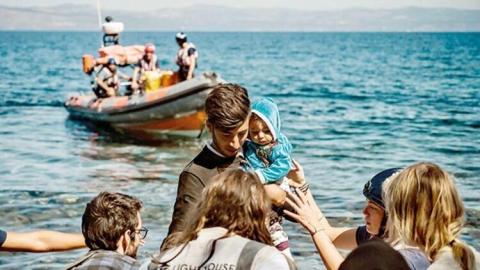 Turkey's Interior Minister Süleyman Soylu has slammed Greek authorities, claiming that the Greek has thrown three migrants into the Aegean Sea, which resulted in one of the victims' death.

Soylu said on Twitter that two of the migrants were rescued while the other one had died following an incident off the coast of the Çeşme district in Turkey's İzmir province.

Noting that the European Border and Coast Guard Agency (Frontex) "must also be held accountable," the minister shared footage of one of the rescued migrants.

One of the migrants said Greek police took their mobile phones and money, and even though one of his relatives said he did not know how to swim, the Greek coast guard threw all of them into the sea.

"The Greek coast guard gave us lifejackets before they left us in the sea, but they were for children and too small. They did not fit on us. My cousin said he did not know how to swim. But they didn't listen to him. They threw us into the water, and he drowned there," he said.

The migrants said that after they reached an island by swimming, the Turkish Coast Guard Command arrived and rescued them.

Turkey and human rights groups have repeatedly condemned Greece's illegal practice of pushing back asylum seekers, saying it violates humanitarian values and international law by endangering the lives of vulnerable migrants, including women and children.