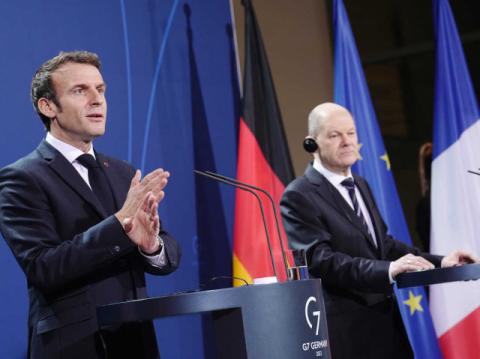 The presidents of France and the United States pledged a coordinated response to Russia's military presence on the Ukrainian border.

Emmanuel Macron and Joe Biden discussed in a telephone conversation the coordination of diplomatic efforts and plans to impose economic sanctions on Moscow in the event of a Russian invasion of Ukraine. Macron does not rule out a visit to Russia as part of attempts at a diplomatic way out of the crisis.

"My priority with regard to the situation in Ukraine is: dialogue with Russia, de-escalation and finding a political solution to the crisis." - confirmed Emmanuel Macron, President of France

Speaking to ZDF television, German Chancellor Olaf Scholz acknowledged that the situation was very serious, but stressed that the German government was doing everything possible to prevent war in Europe.

"Violation of Ukraine's territorial integrity is unacceptable and the price will be high for the one who did it - for Russia. At the same time, we are doing everything possible to find a peaceful solution through talks. Many of our citizens are worried that war could break out. Our common task is, using this dual strategy, to prevent this from happening," Olaf Scholz said.

Poland welcomes the deployment of 2,000 US troops and the relocation of another 1,000 to Europe as a strong signal of solidarity.

"The decision to strengthen NATO's eastern flank shows that the United States and the Alliance take the threat of Russia seriously and act decisively to deter it. The strength of the Allies in deterring a potential aggressor is unity, determination and solidarity," said Mariusz Błaszczak, the...