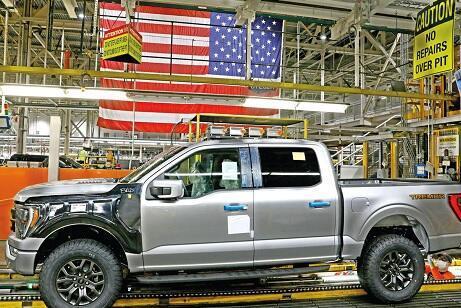 Major automaker Ford will cut its North American vehicle production next week due to a semiconductor shortage, U.S. media reported on Feb. 5.

Ford plans to suspend production of vehicles including the Ford Bronco, the popular F-150 pickup and the new Mustang Mach-E electric vehicle at its plants in Michigan, Illinois and Mexico, according to outlets including CNBC.

Production will be slowed at other facilities in Missouri, Michigan and Kentucky, while overtime will be eliminated at Ford's Oakville, Ontario operations in Canada.

A shortage of semiconductors - essential components in new vehicles, and primarily manufactured in Asia - has impacted automobile production since the beginning of the coronavirus pandemic, causing prices to spike and contributing to surging U.S. inflation.

U.S. lawmakers voted on Feb. 4 to greenlight legislation aimed at jump-starting tens of billions of dollars in research and manufacturing, countering China's growing influence and easing a global shortage of the computer chips.

In late January, high-tech giant Intel announced it would begin construction late this year of two semiconductor factories in Ohio, with the aim of producing chips by 2025. Biden called the $20 billion investment "historic."

Ford returned to profitability in 2021, and last week reported net profit of $17.9 billion. But the manufacturer remains troubled by supply chain problems, and on Feb. 4, Ford shares slumped 9.7 percent on Wall Street.

Ford Otosan, a joint venture of Turkey's Koç Holding and the U.S. automotive giant, last year announced a 2 billion-euro investment to produce new-generation commercial vehicles and batteries at its factories in Turkey.