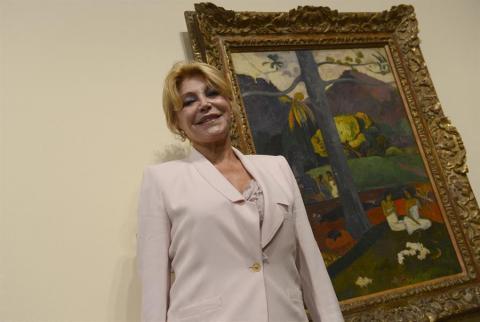 One of French painter Paul Gauguin's most famous paintings, "Mata Mua," will return to a Madrid museum on Feb. 7 following an agreement between the Spanish government and its owner, who took it out of the country.

The artwork had been on display for two decades at Madrid's Thyssen-Bornemisza museum but in 2020 when the institution closed because of the pandemic, the painting's owner Carmen Thyssen moved it to Andorra where she currently lives.

Her decision to take "Mata Mua" to the microstate sandwiched between Spain and France raised fears she would remove other works from her collection which are on display at the museum.

Painted in 1892 in vivid, flat colours, "Mata Mua" depicts two women, one playing the flute and the other listening, set against a lush Tahitian landscape.

It is one of the stars of Thyssen's collection of several hundred paintings which are on show at the museum, including works by Pablo Picasso, Henri Matisse and Claude Monet.

Her collection had initially been displayed at the Madrid museum as part of a free loan agreement signed in February 2002 that was subsequently extended.

But in August 2021 Spain's culture ministry announced it had reached an agreement with Thyssen to rent the collection from her for 15 years for 97.5 million euros, with "preferential acquisition rights on all or part" of the works.