Slovenia’s Election Result Will Echo Across the EU 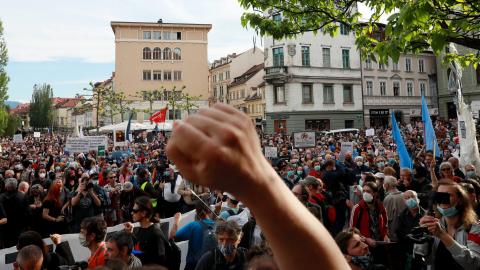 A minority government, it has enjoyed support from smaller parties, which play a significant role in Slovenian politics. Overall support for the government has improved slightly over the past few months, but remains low at 30 per cent. The two core parties of the coalition, not Konkretno, which struggles to get any significant support in the polls, have relatively stable support levels, with the SDS leading in the polls, almost regardless of the government's actions.

The second-largest coalition party, NSi, has moved to the right during its participation in the government and is now sometimes considered a satellite of the SDS. It has taken over the initiative in confrontation with Levica (The Left). Some analysts believe it was testing the waters for joining a potential coalition led by the new party of Robert Golob, by eliminating its potential rival in such a coalition.

In practice, however, its attacks on Levica, including calls to ban it on dubious grounds, have further tied NSi to the SDS, as they made NSi's cooperation with centrist parties even less likely.

Although the minor parties that were instrumental in bringing Janša to power may not pass the 4-per-cent threshold in the election, they may be replaced by newcomers, such as Our Land (Naša Dežela) or the Unite Slovenia (Povežimo Slovenijo) electoral bloc, or by other parties returning to parliament.

Such newcomers are often led by former high-ranking...