Skanderbeg Portraits Over the Centuries Exhibited in Pristina 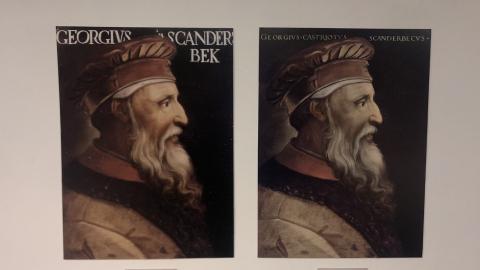 Through 65 works of European and Albanian artists painted over the centuries, the life and work of Skanderbeg are recreated and revealed.

In 2018, the Office of the Prime Minister of Kosovo published a monograph, Portraits of Skanderbeg Over the Centuries, by Professor Luan Tashi, marking the 550th anniversary of Skanderbeg's death.

Tashi told Prishtina Insight that the exhibition, which is the result of his book published four years ago, aims to restore a patriotic feeling to young people - which, according to him, they have started to lose as a result of globalization.

"The exhibition is more for those who could not afford to buy the book because it is costly … this is the point of the whole exhibition," Tashi said.

Naim Spahiu, acting director of the National Gallery, told Prishtina Insight that many visitors were interested in the exhibition.

To publish his book, which inspired the exhibition, Tashi said that he found most of the portraits in places that Skanderbeg had connections with at that time - in the Vatican, Florence, Milan, Verona, Dubrovnik, Albania, and in other parts of the Balkans. Some came from libraries in Washington and New York.

Portraits of Skanderbeg Over the Centuries is now part of the world's major libraries, in Jerusalem, Vienna, Rome, Washington and elsewhere.

Tashi plans to transfer the exhibition first to the National Gallery in Skopje, and the University of Tetova, in North Macedonia, and then to the Mother Teresa Cathedral in Prishtina, the National...