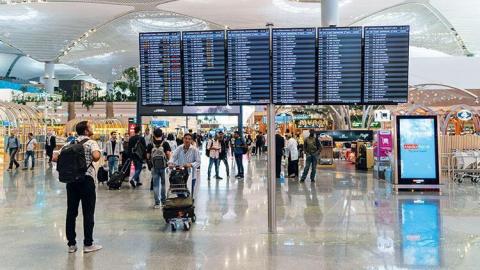 Turkey's airports served a total of 9.3 million passengers in the first month of 2022, marking a 77.4 percent increase from the same month of the previous year, data from the General Directorate of State Airports Authority (DHMİ) have shown.

More than 5 million domestic passengers used the country's airports in January, up from some 3.4 million people a year earlier, while the international passenger tally leaped 128 percent on an annual basis to hit 4.24 million people.

Istanbul Airport, one of the largest in the world, saw a solid 107 percent year-on-year increase in passenger traffic, which climbed to 3.5 million people. It served 2.6 million international travelers in the month, up 106 percent and 892,000 domestic passengers went through the airport, pointing to a 111 percent annual increase.

Sabiha Gökçen, the megacity's second airport on the Asian side, hosted a total 2 million passengers in the first month of the year, up from 1.3 million a year ago, with the number of international passengers rising 104 percent to 989,000 people. Domestic passenger traffic at the airport also grew 14 percent to 1 million people.

Traffic at the country's airports, which slowed significantly due to the COVID-19 pandemic, started to recover, Transport and Infrastructure Minister Adil Karaismailoğlu commented on the latest data, noting that the passenger traffic in January was 66 percent of the traffic in January 2019.

The number of active airports increased to 56 from 23 in 2003, while their number will further increase to 61 with those under construction becoming operational, he added.

In a sign of strong tourism activity already at the start of the year, Adnan Menderes Airport in the province of İzmir on the Aegean coast, recorded a...