President Erdoğan due to visit UAE on Feb 14-15 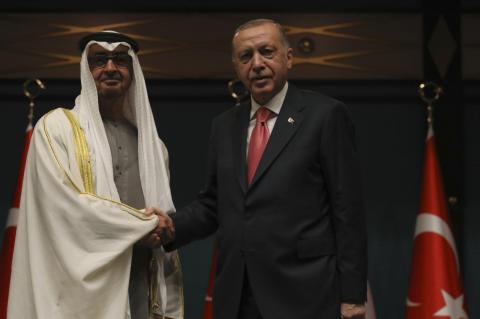 President Recep Tayyip Erdoğan will pay a visit to the United Arab Emirates (UAE) on Feb. 14-15 as the countries stepped up to restore ties after years-long strain.

Bilateral relations between Turkey and the UAE will be evaluated in all aspects, and the possibilities of developing cooperation will be discussed during the meetings, said a statement by the presidency.

In addition to bilateral relations, views on regional and international developments will be exchanged on the basis of the understanding of establishing and maintaining peace and stability, said the statement.

It is also on the agenda to sign agreements aimed at making significant contributions to the contractual ground of bilateral relations, it said, noting that Erdoğan will also visit the World Fair "EXPO 2020 Dubai" and the Turkish exhibition area on Feb. 15.

Relations between Turkey and the UAE were severely impacted after a Saudi Arabia-led blockade on Qatar by Arab nations, including the UAE, that lasted from mid-2017 to early last year. Doha is one of Ankara's closest allies.

The UAE and Turkey backed opposing sides in the Libyan conflict, where a fragile ceasefire has been in place since October 2020.

The UAE has allocated $10 billion fund to invest in Turkey, the CEO of the Abu Dhabi Developmental Holding Company announced.

Turkey and the UAE have agreed to a currency swap deal equivalent to $4.74 billion,...