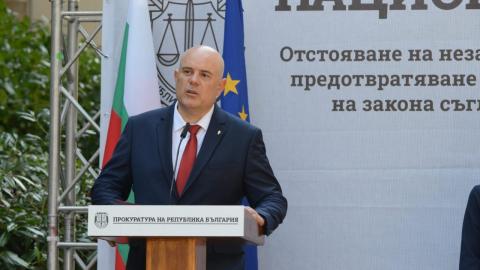 The Bulgarian Constitutional Court's decision to allow the justice minister to request the dismissal of Chief Prosecutor Ivan Geshev came into force on Tuesday - a step forward for the government's aim of removing the man it sees as an obstacle to the reform of the justice system and the implementation of anti-corruption measures.

On February 8, Justice Minister Nadezhda Yordanova said that she will seek the removal of Geshev, often described as an ally of the previous government led by the GERB party, as soon as the decision goes into force.

"This is one of the important measures against the capturing of the judiciary. As a result of an analysis of the actions and inaction of the prosecutor-general, we will start a procedure for his removal," Yordanova told media. The move is now expected to be imminent.

Also on Tuesday, the Justice Ministry and the Interior Ministry's general directorate for fighting against organised crime started investigating whether Geshev was connected in some way to Krassimir Metodiev, who in 2014 was charged with an attempt to murder oligarch and Movement for Freedoms and Rights MP Delyan Peevski.

The move comes after protest group BOEC published photos of Geshev and Metodiev vacationing together at unspecified dates and locations several years ago.

Geshev was elected as Chief Prosecutor in 2019 by a big majority on the Supreme Judicial Council, under the oversight of then GERB party Justice Minister Danail Kirilov, who refused to nominate anyone else. President Rumen Radev blocked the nomination, then Geshev was re-elected. Protests in Sofia followed the beginning of his mandate.

Geshev is often seen by critics as a partner to GERB leader and former Prime Minister Boyko Borissov and his 2017-2021...