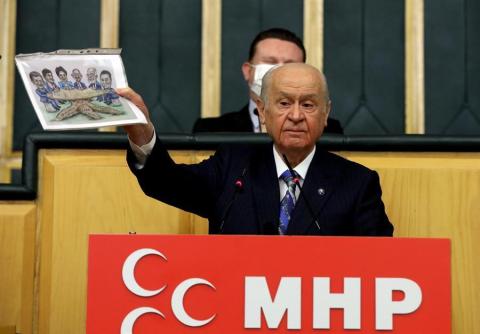 Nationalist Movement Party (MHP) leader Devlet Bahçeli has downplayed a meeting of six opposition parties at the weekend held to shape a road map for a "strengthened parliamentary system."

Bahçeli suggested that the opposition leaders are even "deprived of saying anything new."

"Intention to go back is not reform," he stated, referring to the opposition parties' aim to reinstate the parliamentary system.

"They say they wanted to establish a democratic Turkey where everyone sees themselves as equal. Tell me another one. Everyone living in our country is an equal and free citizen," he stated.

The leaders of six opposition parties held their first meeting on Feb. 12 to discuss the results of ongoing joint work for a return to the parliamentary system if they come to power in the next elections.

A statement released after the meeting said that the "strengthened parliamentary system" memorandum of understanding would be made public by the leaders on Feb. 28.

The Peoples' Democratic Party (HDP) was not invited to the meeting, but Bahçeli suggested that the HDP was "covered" as part of the initiative.

He also resembled the date of a joint declaration by the opposition parties on Feb. 28 to the 1997's "postmodern coup."

The date Feb. 28 is known for the forced resignation...