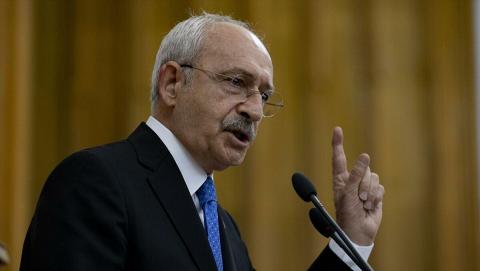 The leaders of six opposition parties are committed to resolving all the problems of Turkey with the spirit of democracy and justice, the main opposition leader has said, recalling they will come together again on Feb. 28.

Kılıçdaroğlu recalled that the leaders of six political parties came together last weekend and signed a joint communiqué indicating the principles and pillars of the opposition move before the next elections. Along with him, Meral Akşener of İYİ (Good) Party, Temel Karamollaoğlu of the Felicity Party, Gültekin Uysal of the Democrat Party, Ali Babacan of the Democracy and Progress (DEVA) Party and Ahmet Davutoğlu of the Future Party met on Feb. 12 in Ankara and publicized a communiqué, a first of its kind.

"It's a historic document. I advise you to get a copy of it and put it in your archives," Kılıçdaroğlu stated, stressing that the unity of these six parties was very important for the political history of Turkey and the world.

"The opposition exists only in genuine democracies. These six leaders came together despite all the blockages, slanders and negativities. What brought us together is our love for our country. We all want to live freely, in democracy and justice," he stated.

Turkey is not well governed and lost its credibility and image in the world, Kılıçdaroğlu said. "We have vowed to reverse this. We, as the six leaders, are committed to correcting this...