Number of terrorists in Turkey around 150: Minister 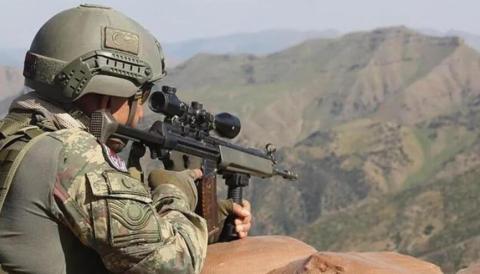 The number of terrorists in Turkey has dropped to around 150, Turkish Interior Minister Süleyman Soylu has said.

Speaking at the Gendarmerie General Command 2021 Evaluation Meeting, Soylu stated that the number of acts of terrorism decreased by 95 percent between the end of 2015 and 2021.

Soylu said the intensity of the acts declined, adding that in the same period, participation in the terrorist organization decreased from 5,558 to 50 per year, claiming that the current number of terrorists in the country is around 150,

Six of the terrorists attempted to attack the Operation Euphrates Shield zone, and four others were preparing for an attack on the Operation Peace Spring area, the ministry said.

Separately, at least four civilians have been killed in Syria's north after the PKK/YPG group fired a rocket on the opposition-held town of Azaz.

Twelve more people were wounded according to initial reports about the attack. The injured were conveyed to a nearby hospital amid fears that the number of casualties could rise.

Azaz was the target of rockets fired from the nearby city of Tel Rifaat. Opposition forces responded to the attack with artillery fire on the group's positions in Tel Rifaat.

Over 50 Syrians in Istanbul’s Esenyurt repatriate