Over 50 migrants pushed back in Aegean rescued 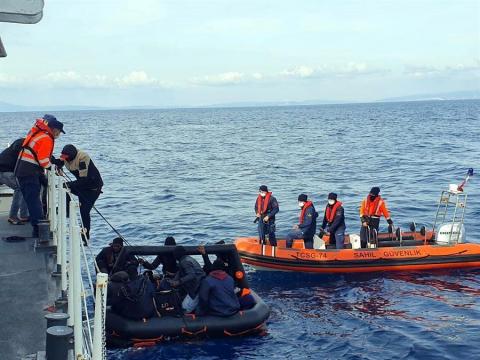 Turkish Coast Guard units rescued 52 migrants off the coast of İzmir province after they were pushed back by Greek authorities.

The Coast Guard Command said on Feb. 15 in a statement they learned that there was a group of migrants in life rafts off Dikili, Seferihisar, Foça and Çeşme districts and dispatched units to the areas.

Later, the asylum seekers, who were in five life rafts, were brought ashore and all of them were taken to provincial migration offices.

Seperately, a total of 18 migrants were apprehended across Turkey yesterday, according to security sources.

Fifteen migrants were held in the northastern province of Kars after it was determined that they were walking towards the city center in groups of three.

Fake road permit documents, which were pretended to be issued by the Isparta Governor's Office, were seized on the immigrants of Afghan nationality.

Turkiye has been a key transit point for asylum seekers aiming to cross into Europe to start new lives, especially those fleeing war and persecution.