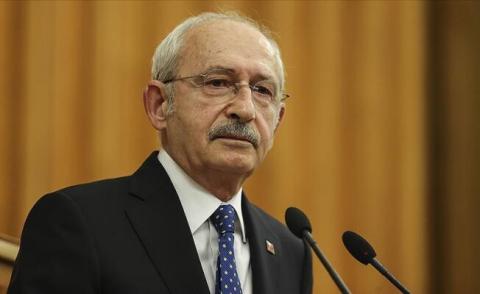 The opposition alliance is drawing a new road map for Turkey, with democracy and justice being a common goal, the leader of the Republican People's Party (CHP) has said.

The reason why the six oppositional parties came together is the fact that they agree that Turkey is not well-governed and they are devoted to saving Turkey from this stalemate, he stated. The leaders of the six parties will come together again on Feb. 28 to announce a road map for a return to the parliamentary system.

"We want the Turkish Republic to strengthen in its region and the world, boost its production by producing value-added goods, and do all these things in full democracy with the prevailing freedom of expression, thought and faith," Kılıçdaroğlu noted.

On a question about the government's accusations that the Peoples' Democratic Party (HDP) is the hidden partner in the opposition alliance, Kılıçdaroğlu said this is a legitimate party that deserves respect. "The HDP is forming its own alliance. We have respect for all the political parties," he said.

Kılıçdaroğlu hosted Meral Akşener of the İYİ (Good) Party, Temel Karamollaoğlu of the Felicity Party, Gültekin Uysal of the Democrat Party, Ali Babacan of the Democracy and Progress Party (DEVA) and Ahmet Davutoğlu of the Future Party at a meeting on Feb. 12. They issued a joint communiqué to underline the main pillars of their togetherness and commitment to replace the current executive-parliamentary system with a strengthened parliamentary model.