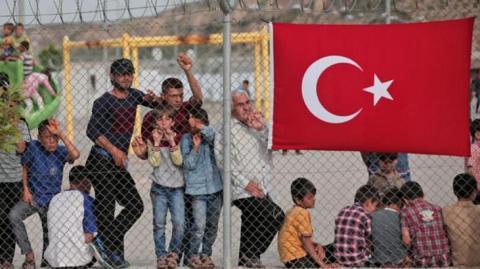 He noted that around 3.7 million Syrians live in Turkey under international protection and more than 700,000 Syrian children were born in the country.

"So far until December 2021, a total of 193,293 Syrians, including 84,152 children, have become Turkish citizens. This figure includes those who were granted citizenship before 2021," Soylu told reporters in Ankara on Feb. 17.

Additional migrants are not allowed to settle in residential areas where Syrians make up 25 percent of the population there, the minister informed.

Following the incident in Ankara's Altındağ district last year, some 4,500 people were transferred to other locations and 309 idle buildings were demolished there, Soylu said.

A fight broke out in August 2021 in the district between locals and Syrian refugees, in which an 18-year-old Turkish man was stabbed to death and dozens of people were detained.

A survey conducted among Syrian migrants showed that 3.1 percent of them do not plan on returning to their country, the minister said.

"While 13.7 percent said they would return if the war is over and no matter what regime rules the...