Vučić from Madrid: "It is clear that Spain will not recognize Kosovo's independence" 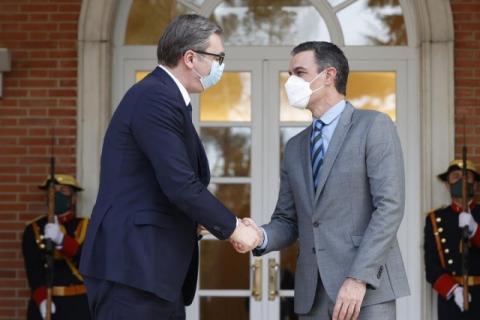 "It is clear that Spain will not recognize the independence of Kosovo, it remains with its position, it respects the integrity and sovereignty of Serbia," Vucic said.
"I thanked for the opening of the fourth cluster of the EU. We will continue to strengthen our relations. I believe that this year we will have the opportunity to host the Spanish king, which has never happened," Vucic said.
Vui revealed that he talked with the Prime Minister of Serbia last night, adding that Serbia will come out with details about the problem of Kosovo and Metohija in the next 48 hours.
"Serbia remembers well the year 1999, when those whose mouths are full of respect for rights today did not think like that in the year 1999, when it came to our country," Vucic said.
"I take blows every day, if you are in politics, if you want to represent a sovereign country, which is small but strong... You have to suffer. They beat our country as they arrived, and in the First and Second World Wars", Vui said, adding: "You have entered the ring, to keep the peace of your country, to keep vital interests."
He added that some people want Serbia to give up everything it has built. "I am not interested in talking about those people who are going against their country," Vucic said.
"German Minister of Foreign Affairs has announced that she is coming to Serbia. Germany is our very important partner and is always welcome," Vucic said.
"Am I happy with the statements of Viola von Cramon? No, I'm not... Am I happy with the statement that they kept the Albanians in Kosovo from genocide? I did not... I have no expectations, I never met Viola von Cramon... I am not the one attacked there, but Serbia. They are not saying that I am stupid, ugly, grumpy, but they are...